Where the Buffalo DON’T Roam

Bad raps, misinformation, negative press and cattlemen rumors… bison have a reputation for being uncontainable.

Can we bust this myth, once and for all? 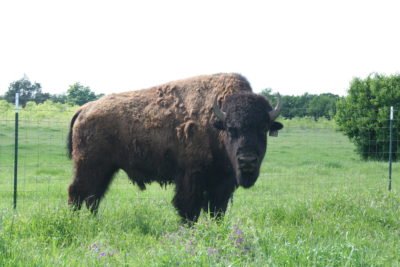 Bison Fencing. Among many undeserved infamies of bison is the myth that they cannot be contained. This is simply in accurate and all too often stated as a matter of fact, which very quickly becomes misinformation and dogmatic truth. As a matter of provable fact and with the benefit of four basic needs, bison are extremely easy to contain on any property, incident free.

The four bison basics are food, family, water and common sense. The fourth basic, common sense, is a human element and bison-basic that can be regionally deficient. I have been diagnosing, documenting and attempting to treat such deficiencies for the last 17 years and can tell you, without hesitation, that when estray bison occur, deficiencies of the fourth bison basic is most likely the rest of the story.

One theory that fits very nicely with the myth that bison are not containable is that of a migratory behavior assumption. This would work well, were it not for the observations of conservation pioneers and ranchers like Charles Goodnight, who observed the documented that the migratory behaviors ceased after the southern herd was reduced to a shadow of its former self. Could it be that with their reduced herd size three bison-basics became plentiful and left the fourth bison-basic to make sense of it all? Out of 618 bison farms reported in Texas by the USDA Census, there has been virtually no estray bison. When it has occurred, it made the news, while farm animals of every kind went estray, every day, as a matter of rural normality.

Another common cause for estray bison and the most prevalent among fence damage occurrences in bison models would include drunk drivers and vehicular damage, washouts and fallen trees. Additionally, in the north, snowdrifts can be the cause of estray bison, as well as estray pigs, chickens, cattle, etc. So it seems on closer examination that fences which are no longer there cause the few bison escapes that actually occur, but because they are not Longhorns, Herefords, or Brangus, they make the news and are indicted for fence damage and escape.

It’s very common for people to assume that bison leap tall buildings with a single bound, and behave as a destructive and uncontrollable force of nature. They can possess those qualities and behaviors but don’t when their basic needs are met.
My original career choice was cattle. I have seen cattle do more jumping attacking and perform more uncontrollable force of nature behaviors than bison. Plus, in my experience, cattle have demonstrated far greater tendencies to go estray and damage fences.

Let’s look at a fence like a buffalo might, literally! Can I see it? Does it look like a barrier? Can I crawl through it? Can I crawl under it? Can I step or hop over it? Finally and representing all four basic bison needs, why would I?

The answer to the last question is the most important part of bison fencing and the reason for the strict protocol when introducing bison to a new property. Protocol includes a control pasture, or small 1-2 acre trap pasture for the purpose of getting the newly recruited bison home and accustomed to ranch operations. The trap pasture most often features additional precautions like field fence/net wire and possibly additional stays.

If you’re planning on receiving more than 100 head of bison at once, you should consider multiple control pastures or an additional acreage within one, but limited to 10 acres. Time allowed for bison introduction to a new property should never be less than 14 days. It may need to exceed 14 days depending on their response to ranch operations and general attitude.

The general attitude you should observe in the bison before release, are they behaving contently as opposed to on edge or pacing the fence. It is within this ‘getting home’ or introduction phase that you can get them coming to feed as a routine. This will be an invaluable tool for gathering your bison or dealing with an estray situation, should it ever happen. Occasional feedings, as protocol, will also contribute to a lack of interest by the bison for the other side of the fence.

Perimeter fences for bison should be constructed for reliable

containment, which is an axiom that applies to cattle as well. There are many fence constructions that work very well, but of 4 foot field fence with 2 to 3 strands of barbed wire on top for total height of 5’3” to 5’6” tall is usually recommended. As a consultant, I know that if a bison operation has this type of fence and there are containment problems, there is probably more to the story. At 6 feet, there will be even less cause for concern, (which is a disclaimer statement and something I do not feel is necessary with adequate bison management in place).

Another option for fence construction that works well, is normal barbed wire construction with 5 to 7 wires and 5’3” to 5’5” high. All other considerations for good, reliable cattle fence construction, apply such as good braces, 3 inch wood or steel post every 30 to 50 feet, good quality wire and no gaps left underneath the fence, big enough to allow escape. Basically, if it will hold Brangus, Salers, Brafords or Longhorns, it will hold Bison that are managed correctly.

In many situations, it is more feasible to add materials to an existing unreliable fence than to tear it out and build a new one. A preferred choice for additional material to existing fence, is field fence/net wire with the addition of more strands of barbed or smooth wire on top. This is also a preferred new construction, at a height of 5’3” to 5’6”. You can also just add wire posts and stays until the old fence line is reliable and tight.

High fence or game fence is widely used in Texas for ranch models that focus on deer and game species. This is more than adequate for holding bison. At 8 feet and if your ranch model is based on game fence that is 6 feet, it will be more than adequate for your bison. The game fence does not work well for areas in which the bison will be under handling pressure. The game fence is not visible enough and though it will hold them, bison may jump into it and be caused unnecessary injury and stress. Wire fences of any kind are never recommended in areas were handling pressures occur.

Electric wire or hot-wire can be an effective tool for certain situations with bison, but should never be relied on for containment by itself. When hot-wire is used, barb wire should be used in order to penetrate the hair coat and deliver a deterring shock. Smooth wire may work if the bison touch it with their nose or short-haired areas, but overall it is not as effective.

Most accounts from bison managers about electric bison fencing, agree that bison learned quickly and retained a very healthy respect for wire of any kind once they have been shocked by a hot wire. For that reason, some bison managers use electric wire as a training aid during the introduction while in the control pasture. However, most bison managers do not recommend electric wire for more than an addition to a well-built and reliable fence.

Internal or cross fences can be built with less attention to containment. Rotating pastures can minimize exposure to internal parasites in bison and maximize forage production and forage crop health. The internal cross fences need only be built up, If there is unauthorized rotation occurring. You will be amazed at just how little fence will contain bison internally.

Problems arise with internal cross fencing when you separate family group members from one another. The behavioral ‘pull of the herd’ will cause the separated subordinates to exhaust every possible option for returning to the herd. If your ranch operations cause this dynamic to exist, it can be handled by separating the groups by whole pastures. The distance across the whole pasture, as opposed to across the wire, seems to suppress the behaviors associated with separation anxiety.

Water gaps and geography will hold cattle differently than bison. In the case of water-gaps, keep in mind that bison are intelligent and curious. They may find opportunity to mess with things that cattle don’t notice. For this reason, the construction of water gaps will be the same, but the precautions may differ. Something left swinging for cattle and held in place by gravity should be fastened with something that breaks for debris and enough water pressure on bison ranches.

Geographic barriers that hold cattle may or may not hold bison. The perspective to apply here is the fact that bison are in their natural home and quite able and willing to handle or negotiate anything in it. Water may stop cattle, but not bison. Rugged and steep grades may represent containment barriers to cattle, but not bison. If bison are caused to do any and all things possible with cloven hooves, they can and will, if they have to.

At the end of the day bison fencing and containment is very easy. However, there are a few things that should be taken seriously. Food, family, water and the fact that they are a wild and native animal are among the top considerations. Bison are the most amenable to containment and management among all the wild species. Contained and propagated as livestock or as wildlife makes no difference to the buffalo. For them it’s all about their basic needs including that fourth bison basic need from us, common sense!