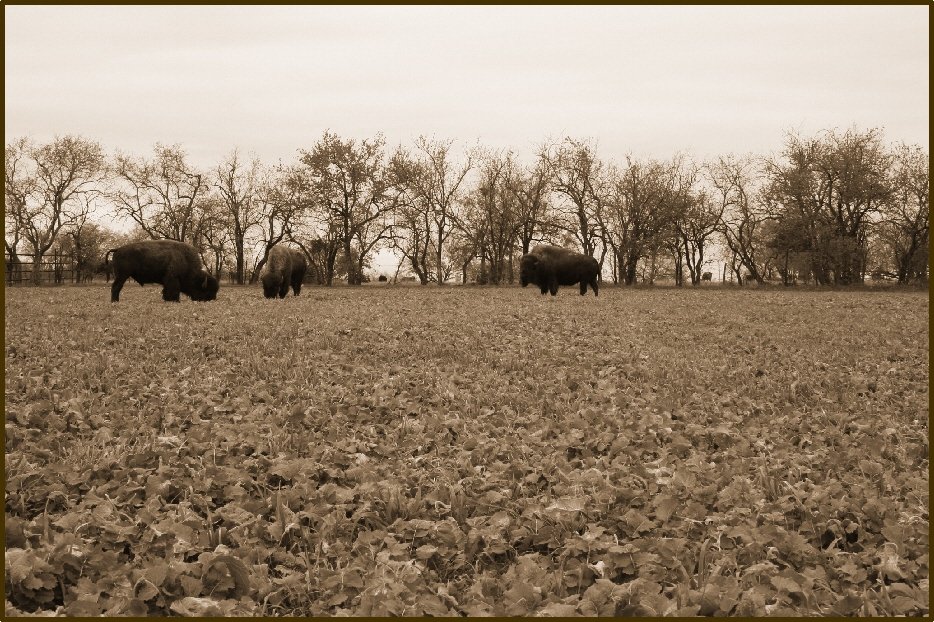 1) Q: Can we run the bison herd with a cattle herd?

A: The NGI operations-protocol meets and/or beats all industry [Code of Ethics] best-practice requirements. The National Bison Association and Texas Bison Association strictly prohibits the cross breeding of American bison with any other species, by any means. The NGI premise is that running bison and cattle herds in co-mingled habitats, has the remote potential of fostering naturally occurring speciation. For interested NGI candidates, the short answer is no..

A: The short answer is no, but with the caveat of: if they are adequately protected. We have learned that bison in game feeder regimes are easily managed with a little bison-behavior knowledge, experience and a pinch of common sense. Many operations perceive bison as inherently destructive and act, or manage, based on cinematic-perception, rumor-mill fact and/or consulting advice gleaned from the ever present institution of higher education and operations-efficacy – ‘I know a guy’. The internet can be also very contributory to false perceptions and over-built solutions. The NGI operates with a cache of satellite-consultants that range in degrees from little to big, but all posses PHD’s from the school of hard-knocks in real-world bison management. The only thing we have no experience with whatsoever: is a situation with no solution.

A: Each NGI participant will have the ability to negotiate an agreement unique to their operation and preferences. The NGI premise would allow the [field-harvest] of culls once they have been deemed un-contributory to the herd. We will be adding herd sires that will likely mature into mega-trophy class bison. At some point their dispatch from the herd will be part of the management strategy. Cows for meat hunts may also be available from time to time. The value of the hunt or [field-harvest] candidates will be based on the commercial trophy and meat industry standards.

A: Go ahead! We do not suggest in any way that beef cattle are not an effective tool. In fact, if you are opposed to bison, for any reason, and have grass to manage, definitely apply them as a solution. They will however: only emulate bison, in that they eat the grass. The disturbance function of bison in habitat restoration models is different and much more dynamic than cattle. Bison have behaviors, gut-functions and physical characteristics that have evolved [with] North American habitat-systems. We are learning more every day, but a few note-worthy observations include: Seed distribution not limited to GI tract function, riparian systems health, avian-species benefits for nesting materials, mechanical soil-disturbance [wallows] related to forbs occurrences – and the list continues to grow. The NGI premise is that cattle are the exotics, and the bison are indigenous.

A: The NGI premise is about applying the bison as agents of restoration and eco-integrity. We propose them as a tool for the development of habitat systems, as opposed to simply maximizing the production capability of the graze-able acreage. We will also accept candidates for more intensive management models. The [50 cows or more] represents the smallest number that is considered sustainable with in an NGI investment.

6) Q: Why do you need the infrastructure to work them if they are so indigenous and wildlife?

A: Because they are now a native in an alien North America. We have learned that the internal parasites and prevalent pathogen reality created over the last 200 + years, requires us to be able to vaccinate and worm on a scheduled and managed basis. 99% of the time they will roam and just be bison, but the 1% of the time that they need attention, will result in a sustainable productive herd. The NGI premise includes taking responsibility for each herd’s success as animals, and as a business model.

7) Q: Are they considered wildlife in Texas, or livestock?

A: Neither & both, while the meat is inspected as exotic. The great state of Texas defines bison as wild and indigenous to the state in the agricultural code and within that definition provides for the species being raised for commercial purposes and for the preservation of the species. They are protected under the Estray laws as livestock and the TP&W code is silent on bison. A complex Texas bison industry works together in order to ensure the restoration of bison in a wide variety of models ranging from conservation, to ranching, to meat, to equine sports and hunting. Agri-tourism and eco-tourism are also on the rise with bison in Texas. CSR 20 was passed during the 83rd Texas legislature in 2013, making Texas Bison Week official through the year 2022. This senate resolution speaks of the sweeping cultural and economic significance of bison to the state of Texas.

A: Yes! The NGI team has been at this for many years and concludes from experience: that there is no difference, regardless of what NGI candidates might read. We don’t argue this point; we just have the experience and training to manage bison regardless of the stamp that gets put on them by interest groups. Like any [wild-species] they are very easy to manage and handle if you do it their way. Their way includes: feed and using their [existing] behaviors to your benefit. To accredit this NGI premise, look at the Yellowstone National Park hazing, human-interaction and [bison-jams] internet proof. Historical journal entries speak of the bison herds 200 + years ago becoming familiar with the sound of riffle-fire during the [Great Slaughter] and the buffalo hunters walking among them as they laid them down with their trusty Sharps. Tribal harvests included burning and calling them visually, in order to manage the herds. The Paleo reality includes industrialized slaughter facilities in the form of mazes and jumps long before the invasive-exotic grazer, the horse, was available. Early attempts at management were limited to harvest, but attempts were made as early as the 1500’s by Spaniards, who referred to them as [the cattle] and failed.

9) Q: Aren’t bison mean animals that will attack people for no reason?

A: Only if the people look like grass… or a threat to their function or family. This is a common cinematic perception about bison that is 99% undeserved. The people that get attacked usually have it coming, because they lack bison knowledge or common sense. The breeding season is the most precarious time of year. The bulls will clearly announce themselves as territorial and defend their territory aggressively. Their territory is [the cycling female], and includes approximately a 100 ft circumference around her. The behavior is easily heard and seen. Other than that, and excluding interactions that are perceived as threats, the bison only attack grass.