Mar 8, 2013 … buffalo’s induction in the Texas Trail of Fame and its prominence as the centerpiece of the seal of the General Land Office. In the Panhandle, a …

North American bison have roamed the continent for some 25,000 years, with up to 60 million estimated to have covered the range in the 1700s, and the land that would eventually become Texas was home to many herds.
Also known as the American buffalo, the animals were central to the livelihood of Native Americans. The Apaches of West Texas, the Hainai Indians of East Texas, and numerous other tribes revered the bison and depended on it for food, shelter, and clothing. By the end of the 19th century, however, hunting had nearly exterminated the entire species.
Without the visionary work of “The Father of the Panhandle of Texas,” Charles Goodnight, the bison may have permanently disappeared from the Lone Star State. In the late 1870s, this noted Texas Ranger and rancher captured two buffalo calves and gave them to his wife, Mary Ann, who fed and cared for them at the JA Ranch. The Goodnights went on to develop a small herd, which formed one of the five foundation herds in the United States and helped produce the buffalo population that exists to this day. Descendants of the original Goodnight bison were moved to Caprock Canyons State Park and are known today as the Texas State Bison Herd.
The bison industry is a growing component of the state’s diverse agricultural landscape. Since 2008, its significance has been commemorated with the observance of Texas Bison Week during the first week of May, a time that also marks the beginning of calving season.
The iconic image of the American buffalo has long been associated with wildlife preservation and Native American traditions as well as the state’s western heritage, as evidenced by the buffalo’s induction in the Texas Trail of Fame and its prominence as the centerpiece of the seal of the General Land Office. In the Panhandle, a bronze sculpture by Veryl Goodnight of Mary Ann Goodnight bottle-feeding a buffalo calf now stands at the historic JA Ranch and Armstrong County Museum as a fitting tribute to the Goodnights’ role in saving the southern herd from extinction, and it is indeed appropriate to celebrate this rich legacy in the Lone Star State each spring.

RESOLVED
That the 83rd Legislature of the State of Texas hereby designate the first week of May each year from 2013 through 2022 as Texas Bison Week. 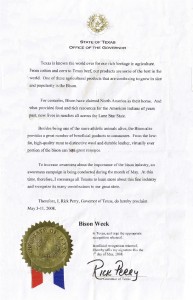 Icon of the American West

The buffalo originally inhabited the Great Plains of the United States and Canada in massive herds, ranging from the Great Slave Lake in Canada’s far north to Mexico in the south, and from eastern Oregon almost to the Atlantic Ocean. Buffalo, or bison, were a keystone species, whose grazing pressure was a force that shaped the ecology of the Great Plains as strongly as periodic prairie fires. They were central to the lifestyle of Native Americans of the Great Plains.