My passion runs deeps for the bison and their history. You would think as a population we would have grown out of the ‘destroy’ mode. But it happened in 2010. Some guy shot a neighbors herd ( 51 head) that escaped and he took some cuts of meat. (reported in the news) From that incident, came the Bison Estray Law here in Texas. I built this site, so people could easily read and learn all about bison, all over the world. It’s an amazing story! 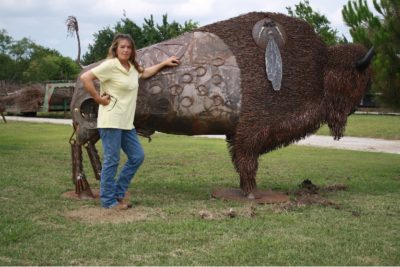 So to continue my work and draw attention to allaboutbison.com & the bison. (plus I have always wanted one) I decided to try my hand at making my own bison from scrap metal. I have been welding for some years, gates, fencing, feeders, etc., but never tried anything like this before. I can’t even draw.  No artistic ability what so ever. I always thought my gift was numbers and stats. Who knew? I mounted him on a lazy susan type pedestal, so I could change my view of him from time to time. The tail is placed straight and nose lowered,  to show the fight response. One side is decorated with cattle hoof prints, while the other is horses shoes. 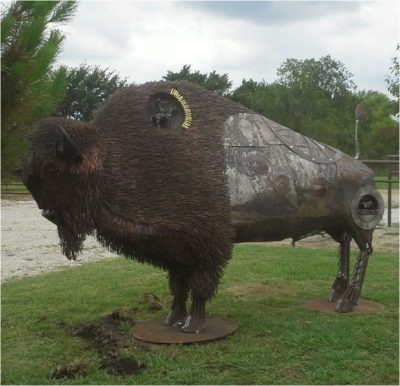 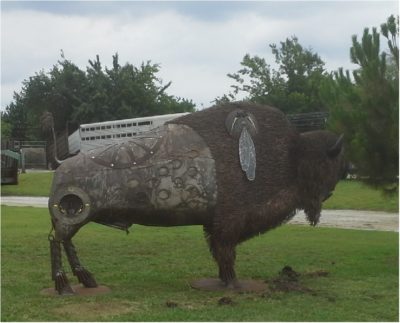 I tried to theme him as the “demise” of the roaming buffalo from the 1870’s -1880’s. I used Railroad spikes for the ankles, and placed a cast-iron engine from the period, on his right hump. Along with 2 carbine rifles. Many times trains would stop or had to stop, the passengers than would climb on top of the train and just start killing as many as they could. (sport) 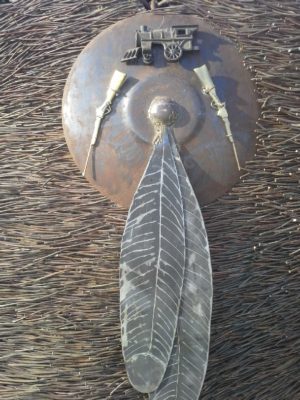 The 2 feathers represent the Natives, not that they had anything to do with the demise, just their existence was enough for Gen. Sheridan.

“Let them kill, skin, and sell until the buffalo is exterminated, as it is the only way to bring lasting peace and allow civilization to advance.”

There were a few Indians that hunted them for their hides, but not many.

His right hip is dedicated to U.S. Grant as control of the army’s desire to ‘take care’ of the Natives by taking away their food source, the bison. This is an old Ford hub/rotor, that I cut off the outer part to make it into a window box to display the history. You can still make out where the spacers were from the part that gets “turned” when you have your brakes done. It was a way to add weight to the hind end and help balance the front end. 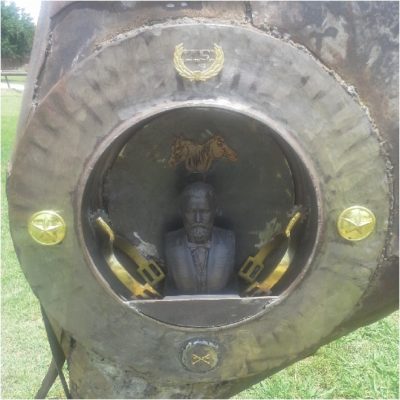 We had settlers coming in from all over. Grazing cattle, putting up fences, towns…pushing the future. On top is the “dotting brands” which consist of a small ‘c’, a long bar (bout 3-4 inches), and a small bar.  These were multi-useful in making several versions of a brand.  The J-L brand is from 1838 Texas and belonged to Jane Long, the cattle rancher. The bottom brand is also Texas in 1762.  The Circle Bar and Seven Bar C, are from Oklahoma, the Double J are two brothers in Colorado. I placed a few pieces of the old barbed wire, “devils rope, spur rowel, and the square barb. The railroads used their own version which was a few squares wrapped around a round wire. (so as not to be confused with the ranchers’ wire) 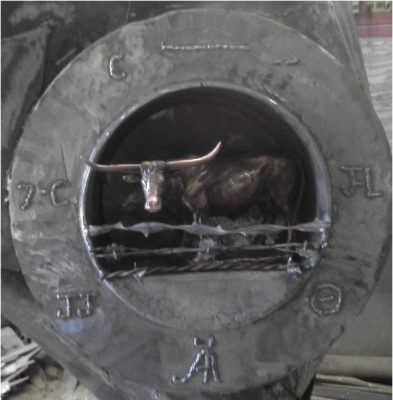 The biggy was the pot/hide hunters. Thousands a day were slaughtered for no more than their hides and maybe tongues.  The new rifles and ammo helped greatly in their endeavors to accomplish this.  I have read stories where they would get into a gambling war from a bar and head out to see who could shoot the most in a certain amount of time. This was called sport. 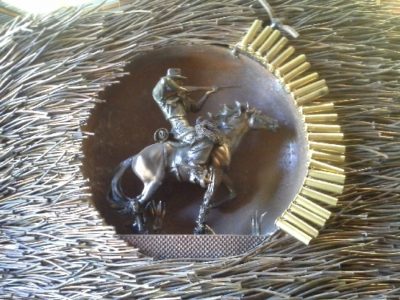 A rasp and horseshoe nails make up the grass.

All in all, it is a pretty disgusting story disguised as progress. I used some old tractor parts on the hind legs.  Old wagon rings helped me fill out the hind legs. The wirehair was actually something the railroads used. I called the Texas Railroad office and the manager told me they got rid of all it back in the early 1900’s, and now use fiber optic cables. Each hair is welded individually by hand, and there is about 600-650 on each front leg.

The back is covered in a wagon wheel dotted with buffalo nickles. 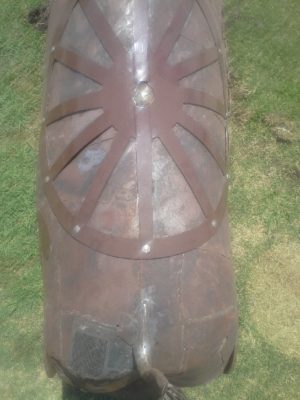 The nose is scrap materials I welded and shaped. The horns were made by covering Jesse’s horns 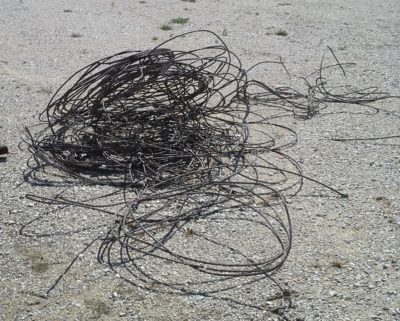 with 4 wires, to get the shape and then filled in with scrap. Each horn may weigh 5-10lbs by the time I got done, and his brows are plow handles. The ears are teeth from some sort of tractor implement. I did not cover them with the copper wire hair, instead, I just painted them to look like they had hair.

This is about half of the pile that was used and needed to be untangled,  straightened, cut, and untwisted before I could use it as hair.

I used two main bulls as models for my project. Mr. Big and Jesse. 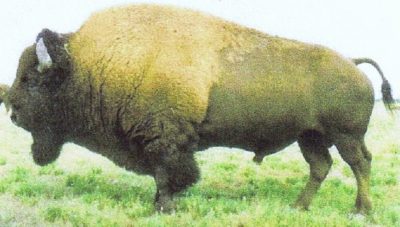 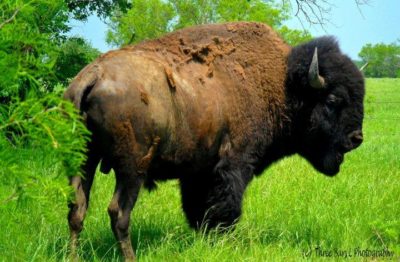