Editor’s note: This is one of a series of essays on contemporary environmental controversies. These issues may well define how or whether we can continue to live and improve our well being on this cosmic speck called Earth.

Hides for clothing and shelter, flesh for sustenance, bones for tools, even uses for horns, hooves, and intestines. Native Americans, especially those living on the northern and western plains, relied on the buffalo for thousands of years.

At one time there were an estimated 30 to 50 million bison roaming the plains. Native Americans were far fewer in number and able to utilize this resource to meet their ongoing needs. They did not reduce the population of the buffalo. Every bit of those they killed was put to work to support their subsistence.

Even after the “every part” was used and finally worn out or consumed, the remains and the detritus were eventually returned to the earth. This could be viewed as the ultimate in recycling and sustainability.

Because it provided so much, the bison was revered as having almost mythical and spiritual qualities. The animals provided for the needs of the people and the people respected and coexisted with the animals.

Everything changed with the push of the white man onto the plains. Settlers built fences and railroads opened up the territories to even more people.

Over a period of about 50 years, the buffalo was hunted nearly to extinction. Millions were killed for their hides alone, others only for tongues that were shipped east by the trainload. Sport killing with carcasses left to rot was widespread and most tragically of all, the military systematically killed bison as a means of dealing with “the Indian problem”.

The Native American bison sustainability model is gone forever. It was doomed from the time the first settler declared a piece of the open range to be “his.” Demographics (7.2 billion people on the planet) and our insatiable appetite for more possessions, more land, more of everything dictate that we can never go back to the way things were. Sustainability has been replaced by consumption.

We continue to extract resources from the earth with no thought of what will happen when they are gone. We cover the land with buildings, with roads, and with other structures that are designed to last for generations and which permanently alter our domain. We no longer “use up” anything. We buy and throw away, creating mountainous landfills as permanent monuments to consumptive lifestyles.

The mother earth is our buffalo. We have been hugely blessed on this planet with a variety of resources that is rich beyond belief. We are attempting to use every part of the buffalo for our sustenance and benefit. That part is good.

What is not good is that we have not figured out the sustainability part. We take and take and take wh
at the earth has to offer. We leave a degraded environment that will not support future generations.

We have come so far along the path of consumption and degradation of the environment that it seems unstoppable. It needn’t be so. We can all question the need for one more coalmine, one more pipeline, one more highway, one more subdivision, or one more gadget in our space. Large and small, there are decisions to be made and actions to be taken that will make a difference.

Our mother earth buffalo is in the same danger as was the plains buffalo of the past. If we do not learn the sustainability lesson, our fate may be the same.

Larry Koehrsen is a long time resident of Muscatine. He brings his engineering background to current studies of environmental issues and especially all things related to climate change. Comments can be sent to koehrsenl@gmail.com. 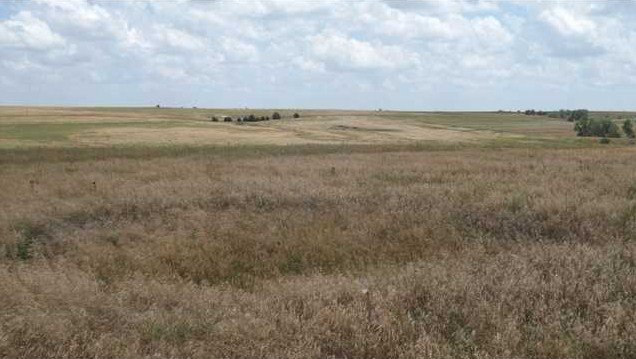 he ecosystem of the prairie grasslands, including buffalo wallows and playas are far more complex than explorers, who once called the area the Great American desert, thought. They are crucial to the health and well-being of humans as well as animals, reptiles and plants.
A common behavior of the American bison, dust-bathing or wallowing results in a circular soil depression that still persist today, apparently caused by intensive soil compaction over many years, including in Barton County, although according to a study by University of Notre Dame, not all depressions were caused by bison.
Clay forms an impermeable floor in …

At one time, the Darby Plains Prairie region occupied some 400 square miles in west Central Ohio. In the 1970s, the Metro Parks system began attempts to restore a semblance of that prairie. Seeds were collected by hand and sown at the Battelle Darby Creek Metro Park west of Columbus.

Tall prairie grasses such as Big Blue Stem, Side Oats and Indian Grass began to take hold. But other flowering plants, known collectively as forbs, were not doing as well, says the park’s senior naturalist Tim Taylor.

“We started to notice that the grasses were overtaking the forbs and we started thinking, ‘This is the way things are supposed to be without large grazing animals eating the grasses keeping them at bay so that the forbs have an opportunity to grow also.’ So we decided, let’s get some bison,” Tylor says.

Bison, of course, had not been seen in Ohio for hundreds of years says the Ohio History Connection’s curator of natural history Dave Dyer.

“They were doing fine until European settlers arrived, with a lot of hunting and a lot of destruction of habitat they just basically drove them out of the state, and the last one was killed in about 1803. So they’ve been gone for over 200 years now,” Dyer says.

But now, bison are back. There’s a small herd at the Battelle Darby Creek Metro Park. On a recent afternoon they were lounging in their winter pasture, chewing their cud, conveniently close to the nature center parking lot…… 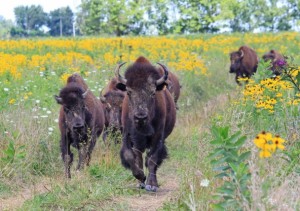 “They’re eating the grasses; the flowers are doing fine and the ecology is balanced,” Taylor says.